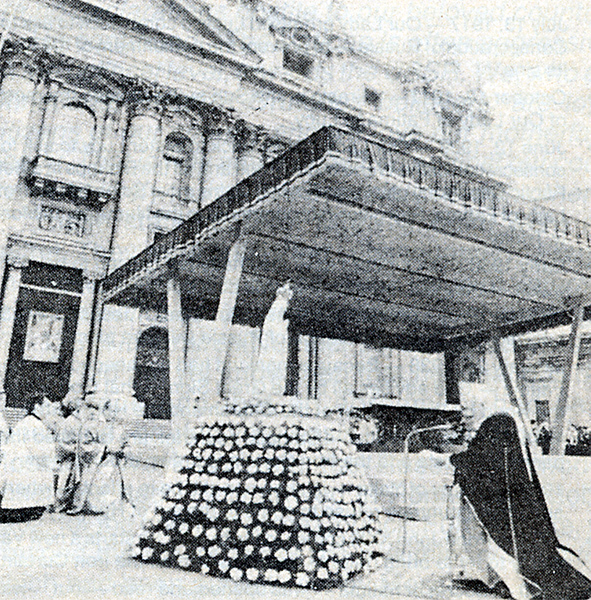 OUR LADY OF FATIMA AWAITS THE BISHOPS

On the occasion for the March 25, 1984 Consecration of the World to the Immaculate Heart of Mary, an immense number of pilgrims filled St. Peter’s Square. The crowd flowed way back into the Via Conciliazione, all the way back to the Tiber River. A prelate who has lived for nearly 30 years in Rome described it as the largest crowd he had ever seen there. The original hand-carved statue of Our Lady of Fatima, the one that is venerated at the little chapel, “The Capelinha”, in Fatima was flown to St. Peter’s for the occasion by the Bishop of Fatima himself. The statue was carried through St. Peter’s Square in front of the Vatican Basilica and placed near the Altar.

On Sunday morning after Mass the Pope knelt in front of Our Lady of Fatima’s Statue and made the Act of Consecration of the World in ringing and emotionally laden tones. He followed the text which he had published beforehand and which we published in The Fatima Crusader, Issue Number 15 “Act of Consecration to Our Lady”. This text he sent to all Catholic Bishops asking them to join him in this act.

POPE JOHN PAUL II PUBLICLY ACKNOWLEDGED
ON MARCH 25, 1984 THAT OUR LADY STILL AWAITS CERTAIN PEOPLES TO BE CONSECRATED
BY THE POPE AND BISHOPS

At a certain point he departed from this prepared text. In Italian the Pope added an extra prayer to Our Lady in the second half of the Act of Consecration. This addition of the Pope was reported in the March 27, 1984 edition of L’Osservatore Romano. According to the report, the words added by the Holy Father were inserted after the sentence “Enlighten the People of God on the way of Faith, Hope and Charity”, the words which the Pope added were “Enlighten especially the people whose consecration and entrusting you are awaiting from us.”

This shows clearly that the Pope is aware that he still needs to consecrate Russia specifically, in the future. For the Pope could have said “…whose consecration you have been awaiting” if he believed that the consecration proper — pronounced several paragraphs earlier fulfilled Our Lady of Fatima’s command.

This becomes even more evident from the report given by a Catholic Italian paper “AVVENIRE” dated March 27, 1984 on page 11. This report tells us that several hours AFTER the Act of Consecration, the Pope prayed again publicly to Our Lady: this time inside St. Peter’s Basilica where by that time the statue of Our Lady of Fatima had been brought for veneration. The Pope prayed to Our Lady in the afternoon of March 25, 1984, as follows:

The Pope by these statements in front of OUR LADY OF FATIMA has PUBLICLY acknowledged the INADEQUACY of what he had done that morning and that OUR LADY IS STILL WAITING for certain “peoples” to be consecrated even after he had that morning consecrated the world. This late report from Rome confirms the analysis given by The Fatima Crusader in “The Pope Moves a Step Closer” and “The Collegial Consecration of the World to Mary’s Immaculate Heart on the Feast of the Annunciation March 25, 1984 (I.E. The Incarnation)” issue number 15. These articles point out that the Bishops must join the Pope in Consecrating Russia. See also “Fatima May 13, 1982: What Actually Happened? Was Russia Consecrated to the Immaculate Heart of Mary?” in this issue.